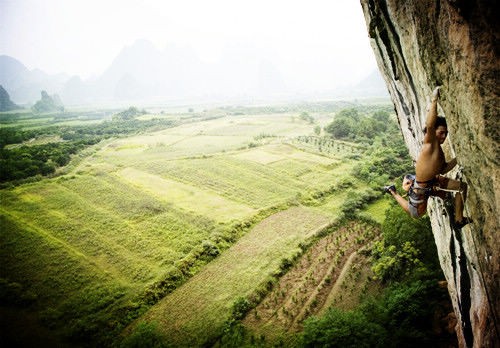 1.Yangshuo is Asia’s fastest developing sport climbing area and is set to rival Thailand as Asia’s hottest climbing area.
2.It is an area of unfathomable beauty; about 70,000 limestone towers make up this inconceivable landscape.
3.The clear sections of sunbaked Limestone hold some superb sport climbing. There are currently 50 or so established sport routes, generally long single pitches 6a-7b.
4.The most famous formation is the Moon Hill arch (a popular tourist attraction) where Steve Mcclure recently added China’s hardest route at F8b. That’s thanks to John Dunne who pulled a key hold off the line prior to Steve’s ascent.
5.The potential for new routes of all grades in Yangshuo is enormous. The forest of rock pinnacles offers unlimited sport climbing of all grades, 200m multi-pitches, river raft access all yet to be unveiled.
6.All this duelled with budget living in one of the world’s most interesting cultures makes Yangshuo a unique destination on the world climbing stage.

The following guide was based on the information we got in 2000. Today, there grows to be 50 routes in Yangshuo.Introduction

The physiognomy of Yangshuo, even including the whole area of Guilin, belongs to typical and peculiar kastology. Many individual peaks stands upright there luring climbers to have a try. It is not an exaggeration that you can find something to climb wherever you look around in Yangshuo. And thanks to plentiful rainfall here, the regolith that once covered the rock was washed off, leaving the rest crevices and knits firm and clean enough for climbing. In short, it seems Yangshuo was made for climbers by the nature.

In the following part, we will try to introduce current climbing sites in Yangshuo along the Yangshuo-Lipu Highway (see the right map and click for a big picture). The transportation is convenient here. Lots of mini-buses go between Yangshuo County and Gaotian Village or Lipu. Besides, you can spend 5 yuan to rent a bicycle at the Yangren Street (meaning Foreigners Street in Chinese because many foreign backpackers gather here) and ride around the whole county for a day.

The Moon Hill (Yue Liang Shan) is one of major scenery spots in Yangshuo. The hill is seven kilometers away from the town and you can get to the foot of the hill in ten minutes or so by mini-bus. The Moon Hill Park requires visitors to buy a ticket. The climbing spot locates on the top of the mountains. You can walk for 20-30 minutes along a stone path leading to the top.

Besides the earliest developed climbing site, the Moon Hill is the most attractive and characteristic climbing spot in Yangshuo. The body of the hill is in northeast to southwest direction. The rock where the climbing route locates faces northwest. Here you can find fourteen bolted routes in total: eight of them are on the right rock face, two routes on the either side of the arch of the hill respectively, and the last four routes with different overhangs where the arch links to the crag.

Each route was coded in order from left side of upright rock (see the upper left illustration). Route 4 and Route 6 each has two pitches. Although these routes are on the same rock face, they varies in direction, layout and size of every holds. So climbers can enjoy different challenges here. Climbing gurus may try the most difficult routes above the arch and rest on the its summit enjoying the wonderful view of the whole Yangshuo. See the detailed information on the following table.

All data are for reference, not the accurate ones.
Data for Route 10 to 12 are not available.

Big Banyan (Da Rong Shu) is about six kilometers away from the town, closer than the Moon Hill. The climbing site is west to the scenery spot and can be reached by passing through a village. It has three bolted routes, two of which are on the steep rock facing south.

Gold Cat Den is close to the highway and four kilometers away from the town. There are two awl-ready routes.

The left route A is 18 meters high with an average grade of 85°. The starting part of route A is a big roof with very big holds. So it is easy to ascend past it with a force. The rest part of the route has many deep crevices and is perfect for climbing newbies. The right one, route B is 18 meters high with an average grade of 85° and a rating of 5.10a. It starts with two continuous overhangs. Big as the hold is, the great span of the roofs require more physical strengths and efforts to get pass. Just like the left route, the rest part of route B is with little difficulty. At the last part of B near the summit is another overhang which you can go by from either side. Route B is developed by Ding Ding, a well-kown Chinese climber and the Chinese contributor of this climbing guide.

Five kilometers away from the town, the peak locates along the section of the highway between Gold Cat Den and Big Banyan. Because the shape of a classical bigwall route here is like a thumb, it is called Thumb Peak by climbers.

The peak stands about 150 meters high. The 130-meter route, along several main big chutes, consists of five pitches by grouped climbing (See the table below). The belayer can use friends in the chutes as well as take advantage of the trees on the rock.

Rack: harness, descender, ascender, carabiners, quickdraws (at least 30), friends (at least three sets), 2 to 3 ropes(60meter), helmet and several slings. Portaledge, headlamp and enough food & water if you plan to rest on the rock at night.